The 18 million Euro Bodega Stratvs which opened in May 2008 is the latest addition to the many Bodegas (winemakers) we have on Lanzarote. Despite its relatively new status the wines being produced at Bodega Stratvs are already winning awards and achieving recognition in the wine world. “Best new bodega” and the silver medal in the International Wine Competition Bacchus 2008. Well worth a visit whilst on Lanzarote to see this new wine making method using Hi Tec production systems and the most innovative techniques. The surrounding land is dedicated to the growing of the vines and within the tour you can learn about the unique cultivation methods employed for the raising of quality vines in this difficult terrain.
Please stop at the Stratvs Bodega to taste the wine and the La Finca Cheeses or to have some lunch in their newly opened Terraza restaurant but more importantly to see the beautifully constructed building which looks like a Cathedral in its breathtaking setting. There is an exquisite shop which sells many delicious and novel items and any wines purchased will be specially packaged for flight travel.

The entry is free to this fine old country  house restored in an immaculate white which reproduces the rural architecture of the island. It boasts a central patio with an aljibi, (water tank), balconies, oven, wine press, ceramics workshop, crafts and carpentry. Visiting the workshops and seeing the domestic objects that reflect the life of the old islanders is a joy.  You may also wish to taste some of the typical dishes in the restaurant beside the Casa Museo which opens at 12noon until 4.30pm.

The Green Cave (Cuevas de los Verdes) are part of a 6Km long lava tube which formed about 3,000 years ago when the Montaña La Corona erupted. Forming one of the longest volcanic tunnels in the world it is naturally of great scientific interest. In 1964 a 2km pathway was opened to show off the caves to their best effect having been lovingly transformed. The main work has gone into an awesome lighting system which highlights the walls of the cave extraordinarily well. The Cuevas de los Verdes was an excellent place to hide from Pirates. The  local people, called the Guanches, who used to inhabit the Canary Islands, were often plagued by Pirate attacks and the Green Caves made an excellent safe retreat.

The tunnel does actually boast a chamber within it which is called the “Refuge” as this was the place they used for shelter.

Please wear good shoes for the tours for your own comfort & safety and take a fleece as it may be chilly underground.

The Jameos del Agua like the Green Caves form part of a 6Km long lava tunnel.The molten lava continued to flow and as it hardened it formed a mass of tunnels which run quite a long way out into the Atlantic Ocean.

Please wear good shoes for the tours for your own comfort & safety and take a fleece as it may be chilly underground.

Visiting the Cactus Garden is true celebration of the worlds strangest plant species and this collection is one of the best in the world. The Cactus are displayed to optimum effect in a wonderfully arranged garden. The entrance to the Cactus Gardens is an 8 foot high metallic sculpture of a Cactus so you cannot miss it! Inside there is a stylish bar, situated beneath the restored Gofio mill, at the rear of the garden.

Returning to the islands from America in 1966 Cesar Manrique decided to champion an ecological approach to the islands development. Just at a time when tourism was beginning to take off and the islands beauty was under threat from the large developers Cesar determined that his beloved island would not succumb to being a 5 star concrete jungle. Using his skills as an architect and designer he united art and nature to to build the wonderful Cesar Manrique home. A major piece of architectural history and well worth a visit if only once!

This house perfectly encapsulates his style and the symbiosis between art & nature.The house is situated on the lava fields that surround much of Tahiche. While he was out walking the green tip of a fig tree caught his eye. It was growing just above the black volcanic rock and he found that it had emerged from one of five large bubbles that had been created within the lava flow.This is where he decided to commence working on his new home. These five underground bubbles were interconnected providing him with a perfect work and display space and creating this unique underground house. The house is built on two levels with the upper floorlooking pretty much like any other traditional white washed island house however, inside there are huge windows affording magnificent views out across the lava fields. Inside he has incorporated some of the lava flow which lends an inside out quality to the whole house. The house welcomes on average some 300,000 visitors a year and is home to a Museum as well as being the HQ of the Cesar Manrique Foundation which promotes philosophy and work.

The land beneath the solidified lava flow used to be rich and fruitful indeed it was known as the bread basket of Lanzarote and home to twelve villages. In 1730 the Timanfaya volcanoes first erupted, an event which lasted six years, destroying the lush land and leaving in its wake Lanzarote greatest tourist attraction. Visitors can enjoy the awesome sights up close on a tour around the tops of the volcanoes as expertly driven buses wind their way through a tight 45 minute route that was blasted through the volcanic landscape back in the late 1960’s. A trip not to be missed for its beauty and history, truly awe inspiring and informative.

The El Diablo Restaurant was created by Cesar Manrique. It sits atop the semi dormant volcano in the heart of the Fire Mountains. A truly inspired circular restaurant allowing perfect panoramic views around the volcanoes whilst you enjoy the food which is grilled over an open crater. Outside the restaurant you can watch the impressive displays of the heat of the volcano today consist of the straw burning and the hot water geezer!

This beautiful mirador is situated in the northern part of the island some 479 meters above sea level and pointing towards Graciosa Island. From up here you will have an excellent view of the whole northern part of the island and La Graciosa. The El Rio offers various perspectives to view the surrounding area from its large circular indoor window which faces the sea. The exterior walkway circles round the building and the upper terrace accessible by a winding staircase make for a hugely interesting and breathtaking experience.

The Green Lake was formed as a result of the 1730 eruptions.Its green color is due the seaweed that lives right under the surface. The sea passes by means of the crater forming a beautiful black beach that contrasts with the green Lake. This lake has been declared a natural reserve so swimming in it has been prohibited although you may swim in the sea off the Black Beach.A few meters on you will find the wonderful El Golfo fishing villiage which boasts some of the finest fish restaurants in the Canaries.

Continuing along the coast northwards from the Green Lake for approximately 3k you will reach Los Hervideros Which is a stretch of very strange rock formations jutting out to sea. Los Hervideros means boiling water and these bizarre formations cause the sea water to literally swirl as though they the water is boiling! The sea bubbles in and out of the lava caves which have formed below the surface and make a spectacular sight when the Atlantic is rough with heavy swells as this produces sprays which are tossed several meters up in the air accompanied by the most fierce some roaring noises.

There are two markets held on the island one at Teguise which is the old Capital of Lanzarote and well worth a visit being over 5000 years old and housing some of the most wonderful architecture and a gorgeous church. The main market day is Sunday and the day starts early if you want to find a parking space! The hustle and bustle of the crowds which can number in their thousands during high season makes this a fascinating day out. If you want a bargain in the souvenir department there are hundreds of stalls. Lots of local bars and cafeterias serve all types of food and drink from the early morning.

Typical items are jewelery, tablecloths, wood carvings, pottery, clothing, scarves, glass, Aloe Vera products and many more.Some of the local shops which will be open on Sunday are quite exclusive and sell exquisite clothing and other items.All this is usually accompanied by some wonderful musicians! A good and interesting experience!

This market which is held on a Wednesday and a Saturday at the Rubicon Marina between 9am and 2pm is lovely as it is set amongst the shops and restaurants of the Marina. All the usual stalls selling a selection of goods plus nice bars and restaurants.

A very different experience from the busy Sunday market.

If you liked the volcano’s then the Visitors Center is a must. Located Just a few minutes further north from the Timanfaya Park entrance on the way to the village of Mancha Blanca and right in the middle of a lava field you will find the Visitors Centre. The center is deceptively large inside and houses all the information on volcano’s and the Lanzarote eruption. Especially interesting is the Eruption Hall which is a very exciting and alarming experience! This hall simulates the noise, smell, smoke and the feeling of an actual volcanic eruption… the children will love it!

An interesting museum set within an ancient farmhouse dating back to 1840 with all its typical utensils and furniture displayed in the largest agriculture cultivation on the island. The wine cellar allows visitors to savor the many different types of Malvasia Red Wine and Goats cheese which are all produced on the farm in the traditional method.El Patio grows fruit trees, tomatoes, cereals and also breeds animals such as goats, camels and chickens.

Wonderful views and walks through the garden before a drink in the bar or a visit to our farm shop.

Newly opened in Arietta this small but informative place is a mine of information about the benefits of this wonderfully healing little plant. The Aloe Vera shop sells only the highest quality products all made only from Lanzarote grown plants some of which make marvelous gifts to take home. There is a sister shop on the seafront in Puerto del Carmen.

Please feel free to contact us to discuss your mobility scooter requirements. 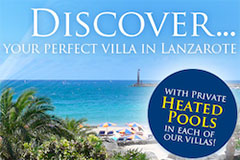